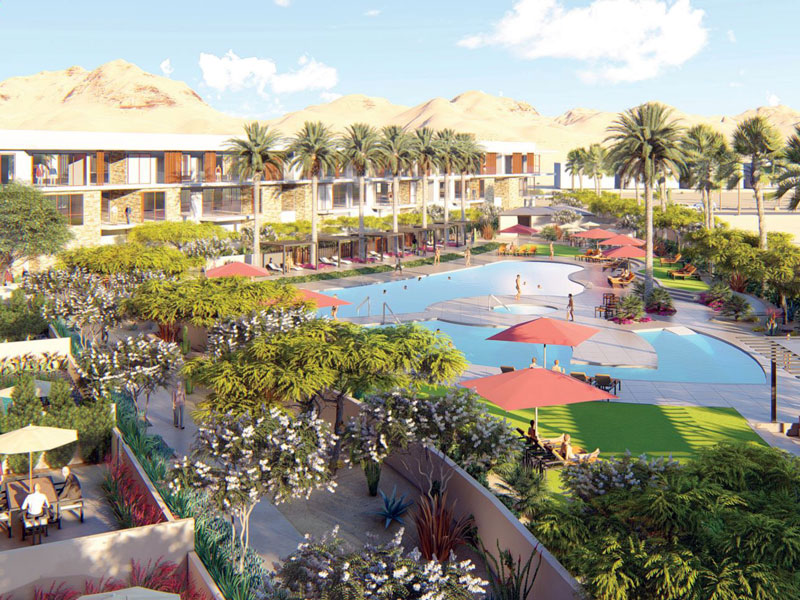 The development will be an upscale apartment community built on nine acres in central Palm Springs off Taquitz Canyon Way. It will comprise 122 luxury apartments, in six-unit configurations ranging from a 1 bed, 1 ½ bath + den, to a 2 bed, 2 ½ bath + den. Units will range from approximately 1,100 sq. ft to 1,800 sq. ft. with every unit including a large usable balcony or patio. The architecture of the community will reference the iconic Mid-Century Modern style. The exterior of the property will include covered surface parking for all residents as well as guest and retail parking, event lawns, BBQ and entertainment areas, a resort-style swimming pool, three jacuzzi spa areas, bocce ball courts, a putting green, orchards, rose gardens and walking paths. Living Out Palm Springs will be Living Out’s flagship community created by Loren S. Ostrow and Paul Alanis, owners of Los Angeles-based real estate company, KOAR International, LLC. Living Out Palm Springs will be a resort project for 55+ LGBTQ+ community members and their allies.

Community officials, LGBTQ+ activists, developers, and future residents of Living Out, Palm Springs will gather to be a part of the beam signing and get a glimpse of the work that has been underway since the groundbreaking ceremony last fall.

“With the support of the Palm Springs community, it is incredible to witness the progress that has been made for what will be a life-changing residential development for LGBTQ+ seniors and allies,” said Chairman of Living Out, Paul Alanis. “The dedication and hard work of all involved to bring to life these vibrant, safe, and welcoming set of homes is another step to address the needs of the LGBTQ+ seniors. As our flagship location, this will be a model for the expansion of Living Out communities across the country.”

With the Grand Opening set for the Spring of 2023, Living Out is excited to announce the name of its on-premises restaurant led by world renowned chefs and restaurateurs, Susan Feniger and Mary Sue Milliken. The menu will showcase the latest and greatest ingredients discovered on their travels with a seasonal Southern Californian approach. The name, Alice B., was inspired by the legendary California-born author Alice B. Toklas, who wrote, amongst other things, a memoir disguised as a cookbook chronicling her life with partner Gertrude Stein. Alice and Gertrude shared a publicly acknowledged and enduring relationship for nearly four decades and, as members of the Parisian avant-garde of the early 20th century, hosted regular salons attended by relative “unknowns” who would go on to become some of the world’s most influential and celebrated artists and writers.

“We are incredibly excited to open our new restaurant, Alice B., and bring our cuisine to Palm Springs,” said Susan Feniger. “It’s been an absolute dream of mine to open a restaurant with fantastic food, full bar, and live music so we were thrilled to be the culinary team behind Living Out’s full-service restaurant and piano bar.”

In addition to the ceremony, the highly anticipated Living Out wing names will be unveiled. The naming will honor historical LGBTQ+ groundbreakers including:

“Del, Phyllis, Carl and Connie each dedicated their lives to improving the quality of LGBTQ+ lives,” said CEO of Living Out, Loren Ostrow. “We are thrilled to be able to honor their work and their memory by naming the neighborhoods of our new community to those whose shoulders we stand on today.”

For a virtual tour of Living Out Palm Springs visit www.livingout.com and for leasing information you can request a reservation here.