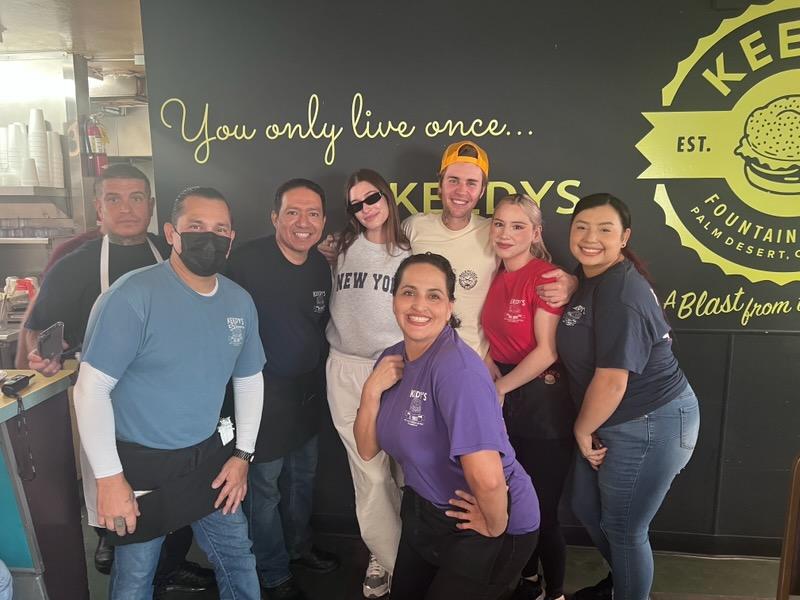 The Coachella Valley continues to be a place where many celebrities escape the hustle and bustle of Los Angeles to either snatch up a vacation property or visit the desert.

Once known for famous celebrities such as Frank Sinatra, Marilyn Monroe, and Bob Hope, the modern generation of talent tend to be spotted about around town from time to time. These include the baby boomer generation like Goldie Hawn and Frasier’s Kelsey Grammer to younger musicians such as Lizzo and Kelly Osborne. Reality tv celebrities are among the mix as well in the Valley from Kyle Richards of the Real Housewives of Beverly Hills who owns Kyle x Shahida, an upscale women’s boutique in El Paseo to members of the Kardashian family.

On their Facebook page, Keedy’s posted that the Bieber’s “enjoyed breakfast at Keedy’s and delighted the team.”

Keedy’s Fountain & Grill is “situated just off Highway 111,” it is a “blast from the past diner,” and is “a popular spot for breakfast and lunch since its founding in 1957. The diner started out as family owned and has changed hands since, but it still retained the warm, friendly feel that makes the place so popular with Palm Desert residents and visitors alike.”

Between the “world’s best pancakes” and desert vibe, Bieber who originally was born in 1994 and raised in Ontario, Canada may have felt at home with the rest of the Canadian snow birds who call the Coachella Valley their home.